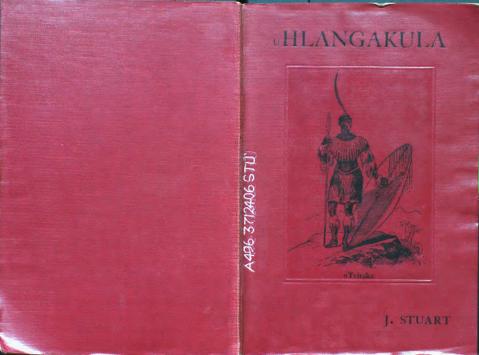 [Stuart, James. "uHlangakula (Incwadi ye zindaba za Bantu ba kwa Zulu, na ba seNatala)". London: Longmans, Green, 1924.] [John Wright in 2018 for the FHYA: In the period 1923 to 1925 James Stuart published five readers, written in isiZulu, for use in schools in Natal. These were uTulasizwe (1923), uHlangakula (1924), uBaxoxele (1924), uKulumetule (1925), and uVusezakiti (1926). All were published in London by Longman, Green and Company. They were intended respectively for pupils in Standards 4, 7, 8, 9 and 3 (Grades 6, 9, 10, 11 and 5). The books consist of compilations of izifundo, or ‘lessons’, on what Stuart called ‘izindaba za Bantu ba kwa Zulu, na ba seNatali’, or ‘matters of the people of the Zulu country and of Natal’. In other terms, Stuart and many of his contemporaries would have seen them as readers on ‘Zulu history and custom’. Stuart gives very little indication of the sources which he used to compile the izifundo. Comparison of the texts in the readers with texts in the published volumes of the James Stuart Archive, and with Stuart’s original notes, reveals that most of the izifundo in the first four readers consist more or less word-for-word of statements made to Stuart by individual interlocutors who can be precisely identified. Occasionally they consist of texts which he put together from statements made by two or more interlocutors. The fifth reader, uVusezakiti, was largely written by Stuart himself. The narratives, anecdotes and descriptive passages which Stuart fed into the readers were mostly drawn from statements which he elicited from a range of interlocutors in the period from 1916 to 1922. The books were prescribed in schools in Natal until the early 1940s, when they were overtaken by a new generation of textbooks. In their time, they seem to have been widely influential as sources of historical knowledge among speakers of isiZulu, but were almost entirely ignored by white academic historians. They are here reproduced digitally as important historical texts in their own right.]