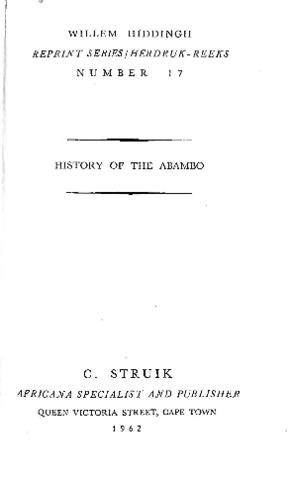 History of the AbaMbo Generally Known as Fingos

[Source - Henry Fagan for FHYA, 2021: A copy of John Ayliff and Joseph Whiteside's book. This is a digitised second edition copy. The book details the history of the Mfengu groups who lived amongst the Gcaleka-Xhosa and the AbaThembu groups during the 1820s amd 1830s.]

[Source - Henry Fagan for FHYA, 2021: Partially written by John Ayliff via dictation to his daughter S. A. Ayliff at an unknown date. Fifteen years later, she passed the manuscript on to Joseph Whiteside, who used it as the basis for three and a half chapters. The remaining eleven and a half chapters were written by Whiteside before 1912. The completed book was first published in 1912 by Gazette. A second edition was published in 1962 by C. Struik. A copy of the second edition book was acquired by UCT Libraries at an unknown date. It was acquired and scanned by FHYA in 2021. Uploaded by Benathi Marufu for FHYA in 2021.]