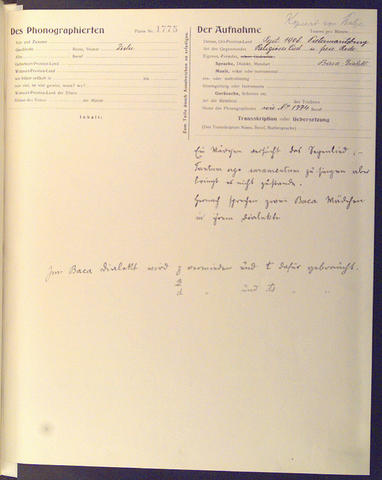 [Source - Carolyn Hamilton for FHYA, 2019, using ÖAW materials: Mayr’s note-taking was sporadic. In his protocols he occasionally gives very few details about some informants, while with others he is quite meticulous. Usually, informants without a first or family name, or informants with names that sound foreign to us, such as Nogwaja, Pakati, Tshingwayo, and Nondhleko, reveal that the person was not a converted Christian, but still a traditional Zulu in the sense that the person adhered to long-established Zulu custom; European-style names such as Frida Kunene and Maria Gertrud(e) Mkize, on the other hand, indicate that these people were Christians. Baptisms were considered successes in the missionary's attempt to "win souls" for the church priorities for the mission. Thus, the baptism registers give some details about those who had decided to change their religion. Typically, when a person was baptised, he or she would take a European name. These names were usually those of European patrons: for example, Fr. Mayr baptised the five-week-old Msomi, Maria Coudenhove, which was the name of the newborn girl's European sponsor. Mlambo, a young man, received the name of his "uncle" or European patron, Franz Rohrmoser (cf. Gütl 2004: 77, 89, 128). The age of the people to be baptised varied from newborn children to elderly people; since most of the latter did not know their birthdays, Mayr was only able to take down estimates of their age into his register (cf. Gütl 2004: 99-100).]