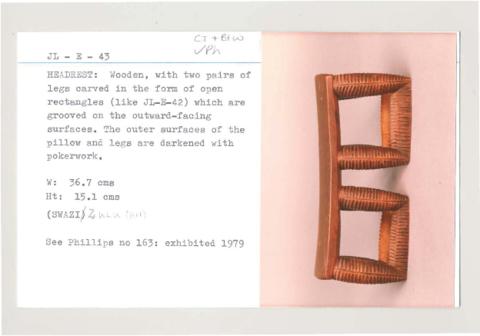 Jonathan Lowen employed Margaret Carey, a British ethnologist, to catalogue his collection in the winter of 1983-84. She classified many of the objects as 'Zulu' (sic) simply because of a lack of information about the objects. (Rhoda Rosen citing Sandra Klopper.) The catalogue cards were made by Brenthurst and bear annotations added later.

The two boxes containing Brenthurst catalogue cards compiled by Margret Carey for Jonathan Lowen, went with the Brenthurst collection to the Johannesburg Art Gallery. They were kept by Nessa Leibhammer in her office during her time as curator at the JAG.]

[Source - Debra Pryor for FHYA, 2020, using Brenthurst catalogue card: JL - E - 43
HEADREST: Wooden, with two pairs of legs carved in the form of open rectangles (like JL-E-42) which are grooved on the outward-facing surfaces. The outer surfaces of the pillow and legs are darkened with pokerwork; W: 36. 7 cms; Ht: 15.1 cms; (SWAZI)[/ZULU] (handwritten annotation); See Phillips no 163: exhibited 1979]