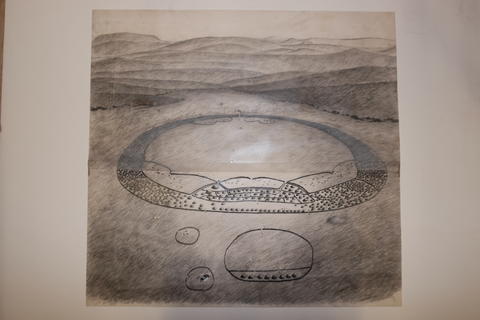 Private Collections hosted by the FHYA

[Source - Frans Roodt for FHYA, 2020: Frans Roodt directed Hester Roodt (nee Lewis) to do this drawing in 1992. The image was an attempt to compose a perspective drawing of uMgungundlovu based on the archaeological site plan of 1992. The landscape is based on an aerial photo of about a 45-degree angle, photographed from a light aircraft flying over the site from south to north. The hills in the background are realistic.

After finding and excavating an extraordinary large hut on the western side (right hand side) of the isigodlo in 1992, which fitted the descriptions of King Dingane’s hut by three contemporary visitors to uMgungundlovu (Retief, Owen and Champion), the standard narrative about the layout of uMgungundlovu was assessed more critically. This hut did not fit the well-known drawing and description of the King’s hut by Gardiner (1835), nor the placement of it on the eastern (left hand side) of the isigodlo in all the reconstructions such as James Stuart’s and others. A leading clue was Gardiner’s sketch depicting a “distant race course” effect. Read together with the account that the town was being rebuilt, but still incomplete (as depicted in his sketch). In a footnote he mentions that huts were moved to the open space shown on his sketch (Gardiner, AF. 1966. Narrative of a Journey to the Zulu Country in South Africa. Cape Town. C. Struik).

After discovering the hut mentioned above, Frans did a reconstruction of the isigodlo area, which is depicted in this landscape drawing prepared by Hester to place the King’s hut in it correct position as opposed to previous reconstructions. This prompted Frans to publish the article: Roodt, F. 1992. Koning Dingaan se woonhut by Mgungundlovu. South African Journal for Ethnology 15 (4). Frans argued and recognised the fact that uMgungundlovu had been enlarged in 1835, that a new hut has been built for the King (which was the one described by Retief, Owen and Champion), and used the archaeological finds to reconstruct the layout of the black isigodlo, the King’s hut and upper cattle kraal. This meant that the earlier depictions of uMgungundlovu, such as James Stuart’s, on which all others were constructed (Lawton, Chadwick, etc.), reflected uMgungundlovu prior to 1835. Major differences were the enlarged ikhanda, the King’s rebuilt hut, and there was now only a single homestead behind the settlement, namely the uBheje, versus three as previously reported.]