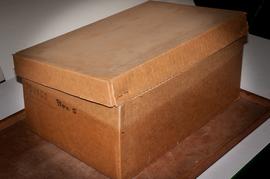 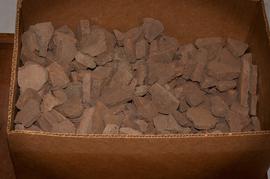 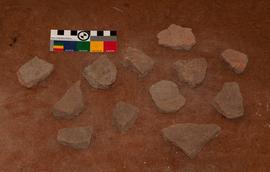 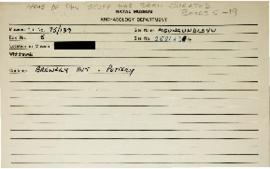 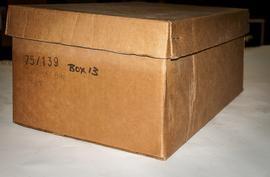 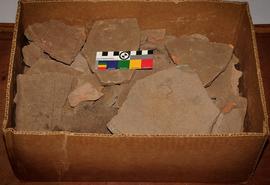 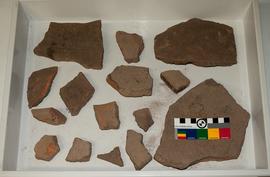 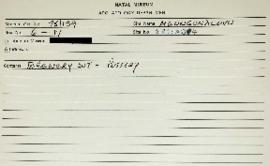 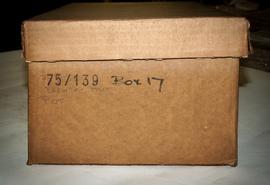 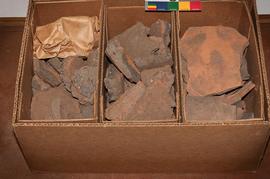 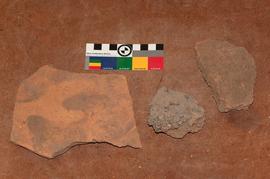 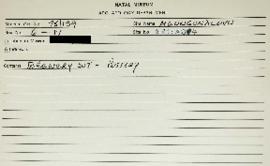 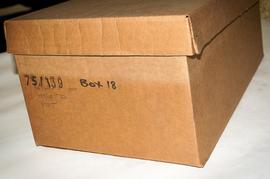 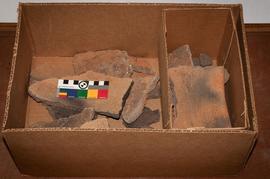 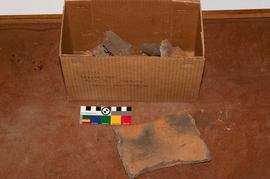 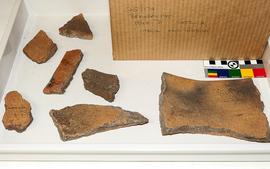 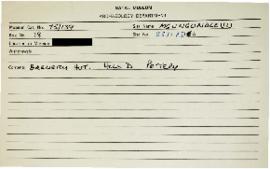 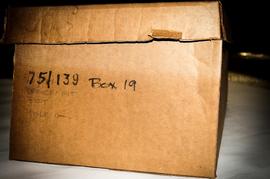 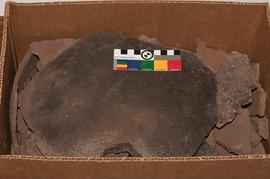 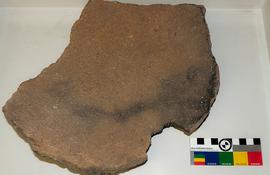 [Source - Chloe Rushovich for FHYA, 2018, using material provided by eThembeni Cultural Heritage Management and material provided through personal communication with Gavin Whitelaw: Following a visit to uMgungundlovu with George Chadwick, who worked at the Natal Education Department and was a National Monuments Council representative for a number of years, Oliver Davies created a Natal Museum archaeological site record for the site. He recorded the owner of the site as the National Monuments Commission. Davies wrote in his site record that “[a] number of huts have recently been uncovered, of a regular pattern: beaten clay floors which is fairly well preserved; clay hearth with raised rim, preserved in many cases; in one or two cases the sockets of the posts which formed the hut-walls. Also, several depressions which are thought to be collapsed grain-silos, and an area where slag and fragments of copper have been found, probably the site of the workshops. Some low banks with bone-fragments in the earth, thought to be middens.” The phrasing of Davies’s report suggests that Chadwick had already exposed hut floors on the site in 1971 through a process of shovel-clearing. Gavin Whitelaw contends that Chadwick might have asked Davies to accompany him to the site to view the progress of this shovel-clearing work. By 1973, Chadwick and E. Wally Hyde, a National Monuments Council Honorary Officer, were shovel clearing on the brewery hut in the isigodlo at uMgungundlovu. Whitelaw suggests that Chadwick asked Tim Maggs, at the time newly appointed to the Natal Museum, to view the shovel-clearing action taking place on the site. Maggs intervened to curb this action. Maggs then conducted a preliminary survey of the Royal iKhanda area along with George Chadwick. 1973. A National Monuments Council communication dated 1 November 1973 incorporates a report from George Chadwick in which he states that in July 1973 he and Maggs had uncovered several floors, collected pottery and beads, and surveyed in detail the floors already uncovered. Two floors were notable: the brewery hut (labelled as Hut 11 in Parkington and Cronin’s 1979 article ‘The Size and Layout of Mgungundlovu 1829-1838’) and the weapon storage hut (probably the hut labelled as Hut 23 in Parkington and Cronin’s 1979 article ‘The Size and Layout of Mgungundlovu 1829-1838’). The physical work was apparently undertaken largely by Hyde and his labour team. The material from this preliminary survey and the curbed shovel clearing was excavated and collected in 1973, but is housed with Martin Hall’s material from his 1975 excavation at the KwaZulu-Natal Museum as a result of a curatorial decision on the part of the museum. eThembeni was tasked with photographing the contents of a randomly chosen single sorting tray for each type of undiagnostic and diagnostic material, and for each field season. The FHYA has not endeavoured to check precisely how eThembeni interpreted this specification. The FHYA arranged this material external to the Hall material into a Maggs series and further 1973 subseries, in which ‘files’ sit. These files contain digital ‘items’ which consist of the boxes and their contents.]