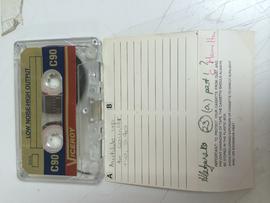 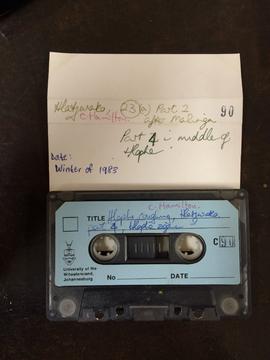 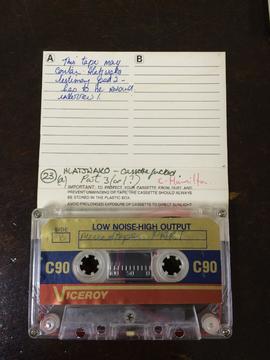 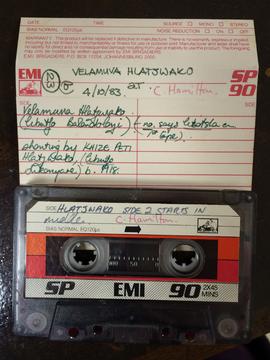 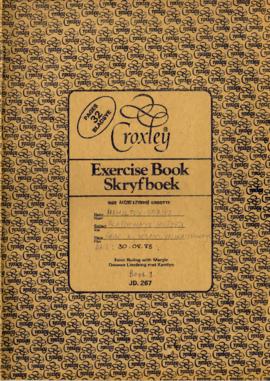 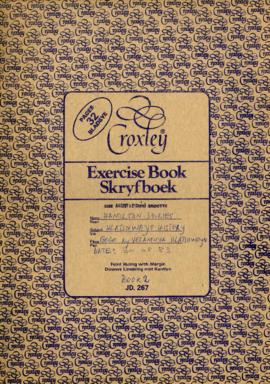 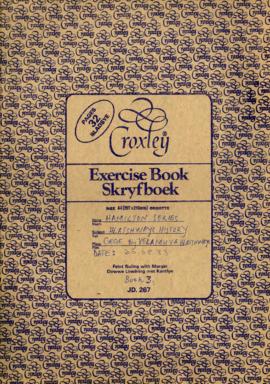 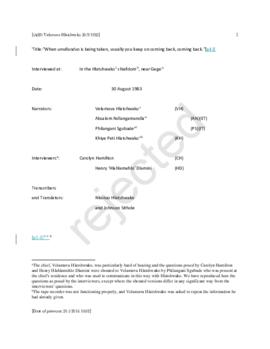 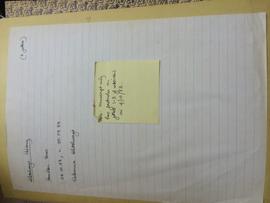 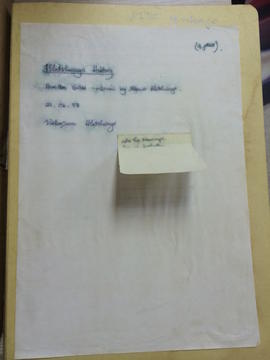 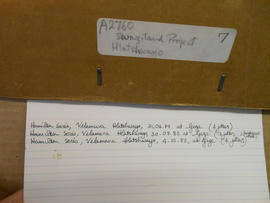 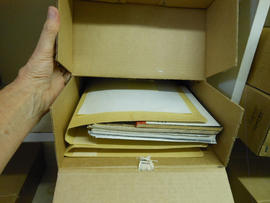 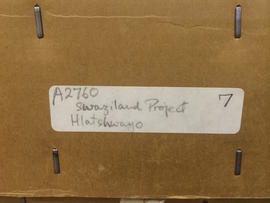 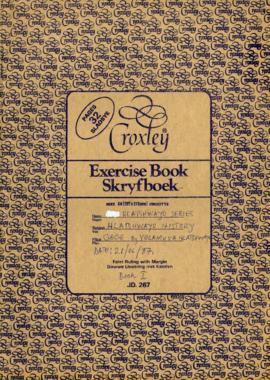 FHYA selection from the Hamilton Series

[Source - Chloe Rushovich for FHYA using Wits materials, 2017: In 1983, a series of interviews on the ‘precolonial’ history of southern Swaziland was conducted by Carolyn Hamilton. The express purpose of her work was to build on the recording work done by Philip Bonner, who was her thesis supervisor at the time, and to focus on materials pertinent to the periods before British colonialism in the south and east of Swaziland. The focus of this work was shaped by Bonner, and his periodization of Swazi history and his identification of historically significant regional variations within Swaziland, and the at the time under-researched nature of the history of southern Swaziland in the eighteenth and nineteenth centuries. Henry ‘Hlahlamehlo’ Dlamini was appointed from the Swazi authorities to be Hamilton’s facilitator in arranging the interviews. He was also involved in the actual interview process. Hamilton received assistance with interviews by John Dlamini, Nkonzo Hlatshwayo, Isaac Dlamini, Mahlaba, and Mr. Ndlangamandla. In 1985, a selection of Hamilton’s recordings was transcribed and translated by a number of students or graduates from the University of Swaziland working with Hamilton. They also transcribed some of the Bonner and other recordings. This process took place at the Swazi National Archives. Some of the transcribers and translators were Johnson Sithole, Nokuthula Vilakati, John Dlamini, Nkonzo Hlatshwayo, Ruth Ndlela, Billy Mavimbela, P. Khumalo, Manganene Dlamini, and Rotter Sicheme Mamba. The group aimed for a form of transcription attentive as possible to dialect variation. The transcriptions were interleaved line by line with literal direct translations into English augmented by annotations as the transcriber-translator saw fit, and sometimes by further annotations by Hamilton. The transcribers periodically added tape duration counter numbers to their texts. The group was assisted for a time by Michael Westcott, a recent graduate of York University with a research interest in oral history. In the late 1980s and early 1990s Hamilton, assisted by an Archaeology graduate student, Ronette Engela, experimented with the possibility of editing the translations for publication. This process created a number of edited typescripts, but the project was not taken forward. In 2012, the Wits Historical Papers undertook to digitize the recorded interviews. This was made possible by a grant from the Carnegie Foundation. A full copy of the digitized recorded interviews was deposited by the Wits Historical Papers in the University of Swaziland Library in 2016. In 2014 the Five Hundred Year Archive commissioned Patricia Liebetrau, a metadata librarian who had worked on the Digital Imaging South Africa project, to undertake the digitization of a selection of the transcripts from the recordings made by Hamilton.]

[Source - Chloe Rushovich for FHYA using Wits materials, 2017: In 1983, a series of interviews on the ‘precolonial’ history of southern Swaziland was conducted by Carolyn Hamilton. The setting of spatial and temporal limits to this project resulted in the accumulation of a denser body of testimony, with greater detail and more versions of individual traditions than in any of the other series. In addition to recording historical narratives, forms of oral data not found in the other series, such as clan praises, interclan relationship claims, the origins of clan names, and myths of origin, have been collected. In 2014 the Five Hundred Year Archive commissioned Patricia Liebetrau, a metadata librarian who had worked on the Digital Imaging South Africa project, to undertake the digitization of a selection of the transcripts from the recordings made by Hamilton. The transcripts selected were those for which a typed-up summary or typed edited typescript already existed. The rationale for this was that the typed version, unlike the handwritten versions could be subjected to optical character recognition and are thus searchable. The linked typed texts therefore act as a kind of index to the handwritten texts and the recorded audio. This selection of transcripts, as well as the already digitized audio, the rejected experimental edited typescripts, and associated materials such as collection boxes, index cards, folders, audio tape cassettes and case labels, and notebooks, formed the FHYA selection from the collection of Hamilton recordings. The Hamilton series is separated into ‘files’ named after each interlocutor.]